“The hills are alive… with the sound of music.” Those words from the famous movie and Julie Andrews put the exclamation point on a wonderful walking day headed toward the William Brien shelter.

Leaving my “Walden Pond” campsite I followed the shores of Little Dam Lake for about a mile and then took a climb up Arden Mountain. At the bottom of the mountain the Palisades Parkway was an interesting challenge to cross at NYC rush hour. Only 34 miles outside the city, the parkway was loaded with cars screaming by. I didn’t have to run across but did have to wait for a while to find a break in the insane flow of cars.

From the Parkway I spent nearly ten miles of amazing walking through beautiful forests with grass floors, across gentle knobs covered with oaks and acres of blueberry bushes, and through quiet carpeted forests with the few firs that have not succumbed to the larvae problem that is killing off local evergreens. All day long I saw only three people, all headed south.

I met two of them at the Lemon Squeezer, an incredibly narrow passage between two hunks of bedrock. A petite lady was stuck and trying to remove her pack to squeeze through. Once she pried herself free I tried the passage and got through with my pack on. The key was to lean while you walked and not get claustrophobic. A wider pack or larger man would have gotten stuck.

I pulled into William Brien shelter earlier than I would normally stop, but I was out of water. New York has so many lakes, but remarkably few springs on the trail. The pollution in streams means you need to plan your water gathering with care. “Trail Angels” place water jugs at many road crossings to help hikers stay hydrated. Frankly I would rather filter a polluted stream in a state park than drink water from an unmarked jug I find by the side of the road.

At the shelter I learned from Cindy by text that her dad has some heart issues that need to be dealt with soon. She decided to leave her Maine trip a day early, and together we decided that I should meet her when she arrives in Huntsville on Saturday night. So… I made the decision to pull off the trail on Friday at Bear Mountain in the Palisades, just a few miles south of West Point on the Hudson River.

The trail to Bear Mountain was three up-downs, ending with a long descent down stone steps into the Hudson River Valley. Bear Mountain and the nearby Hessian Lake were set aside as a park in the 1920’s when competing interests for the relocation of Sing Sing prison and rock mining of the Palisade cliffs along the Hudson threatened the local natural masterpiece of this area. Now, it’s home to the Bear Mountain Inn, a chestnut log resort between the lake and the Hudson. A stunning setting!

I was sad to leave the trail early, but did not complain about the shower, the tub bath, the hot dinner, and the continental breakfast the next morning. Considering that I lost about 11 hours over the last 8 days dealing with various “emergencies” I figured I had really hiked for 7 days. From the Delaware River to the Hudson River in about a week and 110 miles. Next year I will walk from Bear Mountain Inn to Bear Mountain at the Connecticut-Massachussetts line. One day, God willing, I’ll reach Mount Katahdin in Maine. All in His time.

It says in the Book of Romans in the 10th chapter, 28th verse that “all things work to the good for those who love God and are called according to His purpose.” My trip ended with the most remarkable experience, one that could not have happened if I’d not been delayed at the start, delayed to repair the car tire on day 3, or had not decided to terminate at Bear Mountain Inn. God placed the most amazing people in my path, a remarkable “bow” on this beautifully wrapped gift of an Appalachian Trail hike.

As I descended Bear Mountain I passed one of many Jewish families I’d seen in New York and New Jersey. The mountain park had hundreds of visitors this day, many of them trying their legs on the long hike up or down Bear Mountain. A gentleman my age and a daughter in her mid twenties were speaking what sounded like Hebrew. As I passed they asked about the hike to the top of the mountain in the direction from which I’d come. That conversation led to the gentleman sharing in broken English that he’d always dreamed of walking the Trail since he’d immigrated to the US and to his new home in New Jersey. This trip, with his daughter Amy and her new husband, Rafael, a French Jew studying to be a rabbi, was his chance to set foot on the famous path. It was a lifetime dream that moved him deeply, and he was thrilled to meet someone who had chosen to hike the path.

We talked for a long time about how to hike and where, how to get started and when to start, as we walked down the long flight of stone steps and gravel path. I learned that his daughter and son-in-law lived in Jerusalem and that day there had been five terror attacks in their neighborhood. They were all very concerned about their return to their home in Israel, and dad feared for them. Amy and Rafael are pictured with me in the attached photo.

In the progress of things, our discussion turned to the Israeli-Palestinian problem. They poured out their hearts about a desire to have peace, and their frustration with the constant struggle that Israel faces where it’s planted in the middle of Islamic nations. I began to share with them my background in writing and speaking about Islamic issues, Constitution issues, and the danger that we face by ignoring the rise of Islamist extremism in the US. By the bottom of the descent, standing at the door to the Bear Mountain Inn, I realized how blessed I had been to hear the passion and heart of some of God’s people suffering directly from the events in Israel, and how they had been blessed to meet someone who understood all of the dynamics of their struggle. It was an instant bonding. Benjamin, the father, left our hour-long encounter encouraged to hike the trail, and encouraged that some Americans did in fact understand the struggles faced by the people of his faith. His son-in-law, who cannot wear his Kippah (skullcap) in France now for fear of retaliation by Islamic groups, smiled for the first time that day when I told him “Do not fear. You are welcome here.” And his daughter Amy, translating English, French, and Hebrew among the four of us, was beaming. Something in her smile and her demeanor said “someone cares.” When I met her, she was texting friends in Jerusalem about the attacks, speaking with her dad about the danger of returning home while her new husband walked ahead of us, deeply concerned. At the bottom of the mountain, their minds had… for a time…. been taken off the brutal reality of their situation and they were at ease. My mind was taken off the knee pain and the last mile of the descent. I’d made new friends and they truly felt welcome, not afraid. I was refreshed in a wonderful way, and I sensed that they were too.

God is the designer. He laid out these woods and I am sure He placed Benjamin, Amy and Rafael in my path. He cares for them and for me, and in some way we all needed each other this day.

What lies ahead on your path today? Is there an “Agony Grind” climb facing you, or is today a “Sound of Music” kind of day? Has God put Benjamin, Amy and Rafael in your midst, trusting that you will minister to each other this day? Has He placed a Mark and Deb Ripka on the path going your direction to encourage you? Are you camped in the dark gloom of a “bear’s den” struggling with real fears? Have you encountered Greg, lost in the woods, trusting that someone will show him the way? Whatever He has allowed in your path this day, trust in Him for the strength to persevere and endure. Thank Him for the blessings and for the strength that you will develop in the trials. We are all being shaped for His service.

And … very important… don’t focus too much on the trail’s end, whether it’s Mount Katahdin or just getting through this day. The one thing I’ve learned is that life is a journey, not a destination.

Enjoy the hike, wherever it takes you. Trust God every step of the way. He will not fail to walk with you, to guide you, sustain you, and to forgive you. You only need to ask. 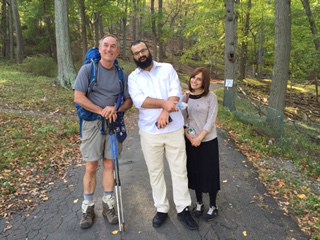